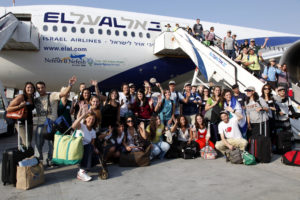 The Hebrew word aliyah translates as “elevation” or “going up” or “moving up”. The word can be used both for being called up to the Torah reading in Temple and for moving to the Land of Israel to become a citizen.

Since the establishment of the state of Israel in 1948, the small country has provided a refuge for Jews around the world to escape oppression. Jewish immigrants poured into Israel while fleeing Russian communism,  Ethiopian violence, Iraqi dictatorships and worldwide anti-Semitism.  Jews from all over the world have reached the moment of decision to escape the threat of persecution, violence, tyranny and death to arrive safely within the borders of their ancestral homeland, Israel.

Israel is the Jewish homeland. It is the land promised to the descendants of Abraham in his covenant with G-d, the land that housed the holy temples, the land which is forefront in both the Jewish Tanakh and the Christian Bible, the land to which the Jews have been longing to return for 2,000 years.

The term aliyah, going up to Israel, is first used in Genesis 50:7 in reference to Jacob’s bones being brought from Egypt to what would be the Land of Israel.  “And, with the advent of the Messianic era, it is the land where the Third Temple will soon be rebuilt. It is truly a holy and elevated place.”1

The return of Jews to Zion represents the fulfillment of the biblical prophecy.

Hosea 3:4-5 – “For the Israelites will live many days without king or prince, without sacrifice or sacred stones, without ephod or idol. Afterward the Israelites will return and seek the LORD their God and David their king. They will come trembling to the LORD and to his blessings in the last days.”

Hosea 6:1-3 – “Come, let us return to the LORD. He has torn us to pieces but he will heal us; he has injured us but he will bind up our wounds. After two days he will revive us; on the third day he will restore us,  that we may live in his presence.
Let us acknowledge the Lord; let us press on to acknowledge him. As surely as the sun rises, he will appear;
he will come to us like the winter rains, like the spring rains that water the earth.”

Ezekiel 37:12 – “Therefore prophesy and say unto them, Thus saith the Lord GOD; Behold, O my people, I will open your graves, and cause you to come up out of your graves, and bring you into the land of Israel.”

Ezekiel 38:8 – After many days you will be called to arms. In future years you will invade a land that has recovered from war, whose people were gathered from many nations to the mountains of Israel, which had long been desolate. They had been brought out from the nations, and now all of them live in safety.

Isaiah 11:10-12 – “In that day the Root of Jesse will stand as a banner for the peoples; the nations will rally to him, and his resting place will be glorious. 11 In that day the Lord will reach out his hand a second time to reclaim the surviving remnant of his people from Assyria, from Lower Egypt, from Upper Egypt, from Cush,[a] from Elam, from Babylonia,[b] from Hamathand from the islands of the Mediterranean.

He will raise a banner for the nations  and gather the exiles of Israel; he will assemble the scattered people of Judah from the four quarters of the earth.”

Isaiah 66:8  – “Who has ever heard of such a thing? Who has ever seen such things? Can a country be born in a day or a nation be brought forth in a moment? Yet no sooner is Zion in labor than she gives birth to her children.”

Jeremiah 30:3 – This is the word that came to Jeremiah from the Lord: “This is what the Lord, the God of Israel, says: ‘Write in a book all the words I have spoken to you. The days are coming,’ declares the Lord, ‘when I will bring my people Israel and Judah back from captivity and restore them to the land I gave their ancestors to possess,’ says the Lord.”

In a stunning and remarkable moment, Prime Minister Benjamin Netanyahu also declared to the people of Europe and the world that the prophecies of Ezekiel 37 have been fulfilled. The Holocaust, he said, represented the “dry bones” and “graves” of the Jewish people, and out of that horror the State of Israel was resurrected, just as the Lord said would happen through the Hebrew Prophet Ezekiel. Rarely has any world leader given a major address on an international stage declaring End Times prophecies from the Bible have come true. But that is exactly what Netanyahu did. – Joel Rosenberg

“2015 saw a record number of French Jews immigrate to Israel, nearly 8,000. France has Europe’s largest number of Jewish people, at about 550,000. Many who came to Israel cited economic uncertainty and antisemitism. Most left France because of fear and security issues related to Islamic terrorism. In general, immigration to Israel was up with 30,000 new arrivals, a 15-year high for Israel’s population growth and development.”2