The Beginning and the End.

The First and the Last.

The First and the Last and Everything in between.

‘Aleph – Tav’ is the equivalent shorthand for the word ‘alphabet’ or ‘ABC’s’ since Aleph is the first letter and Tav is the last letter of the Hebrew alphabet.

The first instances of the mysterious Hebrew word ‘et’ which is spelled Aleph-Tav are found in Genesis 1:1

“in the beginning created Elohim את the heavens ואת the earth.” 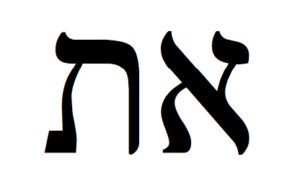 Other passages which include the Aleph-Tav include:

If you’ve found this to be interesting, you might also like to read these articles and resources: