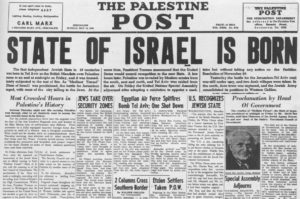 #Zionism is a Jewish nationalist movement that has had as its goal the creation and support of a Jewish national state in Palestine, the ancient homeland of the Jews (Hebrew: Eretz Yisraʾel, “the Land of Israel”).

A religious variety of Zionism supports Jews upholding their Jewish identity defined as adherence to religious Judaism, opposes the assimilation of Jews into other societies, and has advocated the return of Jews to Israel as a means for Jews to be a majority nation in their own state.

The term “Zionism” was coined in 1890 by Nathan Birnbaum.

Its general definition means the national movement for the return of the Jewish people to their homeland and the resumption of Jewish sovereignty in the Land of Israel.

From inception, Zionism advocated tangible as well as spiritual aims. Jews of all persuasions – left, right, religious and secular – formed the #Zionist movement and worked together toward its goals.

Disagreements in philosophy has led to rifts in the Zionist movement over the years and a number of separate forms have emerged, notably: Political Zionism; Religious Zionism; Socialist Zionism and Territorial Zionism.