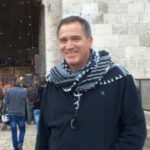 SDSU’s Students for Justice in Palestine (SJP) has invited Miko Peled — who referred to Jews as “sleazy thieves” — to participate in “Palestine 101,” an event that, according to its Facebook page, “will give an introduction to and history of the Israeli Occupation of Palestine.”

Born and raised in Jerusalem in 1961, Peled grew up in a prominent Zionist family; his grandfather, Avraham Katsnelson, signed Israel’s Declaration of Independence.[2] His father, Mattityahu Peled, fought in the 1948 war, and served as a general in the war of 1967; Peled is a regular contributor to online publications like Electronic Intifada and the Palestine Chronicle.  Peled is also a a sixth-degree black belt, and is widely thought to have been kicked in the head one too many times.

SDSU’s SJP event comes the same week another anti-Israel student group on campus, SDSU Divest, announced its return to the university. “We’re back. #SDSUDivest #FreePalestine,” the group said in a Facebook post.

Miko Peled. Photo: Facebook. An anti-Israel group at San Diego State University (SDSU) will host a lecture on Thursday by an infamous Israeli activist whose use of antisemitic rhetoric on social media recently sparked a major controversy. SDSU’s Students for Justice in Palestine (SJP) has invited Miko Peled — […]